Stepping Up for Journalists in Mexico’s Drug War 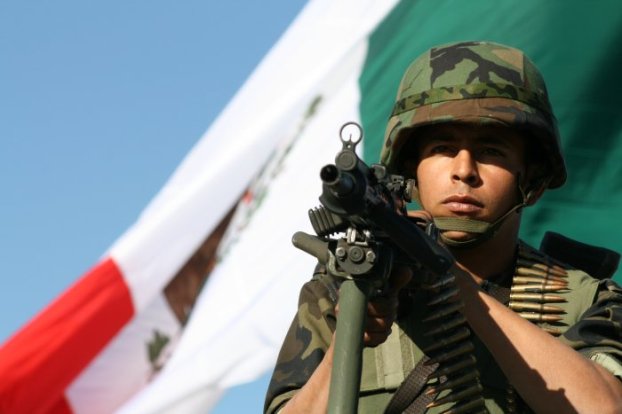 This is an official photo from the Mexican Ministry of Defense representing the country's anti-narcotics operations.

Credit where credit is due: the U.S. government admits the flow of illegal drugs northward to the U.S. market through Mexico fuels the Drug War.  This past week, E. Anthony Wayne, the U.S. Ambassador to Mexico announced a new $5 million program to protect journalists in the war.

Some journalism organizations call Mexico the most dangerous country in the world for members of the media with “nearly 80 killed” since 2000, reports the Knight Center for Journalism in the Americas.  The Committee to Protect Journalists listed Pakistan as the most dangerous country in 2011, with Mexico as fourth.  (For more on these dangers, please see “Mexico: Journalists & the Drug War.”)

However, the number of civilian casualties reveals the real price Mexican society is paying.  The Mexican government lists 12,903 killed in just nine months of 2011, from January through September.  The Mexican government also says 47,515 people have been killed since 2006.  (The New York Times reported this week about how experts believe those numbers actually under-count the totals.) That’s becoming comparable to the 58,272 members of the U.S. military killed in the Vietnam War.

Last week, Genaro Garcia Luna also visited Washington, D.C. touting his new book The New Public Security Model for Mexico. (Former U.S. Ambassador to Mexico Antonio Garza promotes the book as showing “real progress” in the Drug War.)  Garcia heads the Mexican Ministry for Public Security, basically comparable to the U.S. Justice Department and overseeing Mexico’s infamous federales.  Given the bleak and bloody statistics of the Drug War in Mexico some might wonder how Garcia could speak without some shame about what he is calling a successful solution to Mexico’s security problems, let alone write a book about the government’s so-called “breakthrough” plan.  Given the statistics, one has to wonder how high the body count would be without Garcia’s breakthrough plan.

To be fair, is Ambassador Wayne’s plan any better?  Isn’t $5 million a drop in the bucket compared to what the U.S. could do to help? Shouldn’t it be more to make up for so many lives lost in the fight over illicit drug markets and transportation routes?

The answer to that criticism might be, at least, it is a start.  (And to be fair, Garcia’s plan is also at least a start, although it comes off as bureaucratic gamesmanship to grab credit at the end of the administration of Mexican President Felipe Calderon.)  That $5 million grant will be spread over four years and will be administered by Freedom House* which will work with the Mexican Human Rights Commission, the Mexican Interior Ministry, and with Mexican non-profits.  The U.S. embassy has supported other safety programs for journalists in the past, which included training for reporters in hostile conditions, along with training on how to use electronic tools to protect their online identities and cell phones conversations.  The drug cartels have turned lately to targeting not just professional journalists but also users of social media who might write about cartel activity.

But short of guarding at-risk journalists, there may be no practical way to prevent the number of journalists killed from scaling ever higher on the statistical charts.  Mexico’s presidents have ordered the Mexican Army to such guard duty at times beginning in the late-1990s.  (This author rode with Mexican Army troops guarding investigative reporter and editor Jesus Blancornelas of Zeta in Tijuana, when Blancornelas was still alive and crusading against the cartels.)  But that is a very expensive and cumbersome solution.  And only high-level journalists like Blancornelas could make such an arrangement work and not let it get in the way of their work.

The basic solution is simple, but it won’t be easy.  Mexico’s armed forces, police and intelligence services, despite their internal corruption issues, must regain total control of states like Tamaulipas where the drug cartels seem to operate with impunity.  And once they regain real control they must enforce the rule of law.  Without Mexico’s government attaining those goals, and without more U.S. support, all journalists can do is continue to carefully report the story of the attacks on their profession.

*The author served as a paid consultant to Freedom House for several years in the 2000s.

(The photo is from the Mexican Ministry of Defense and is in the public domain.)