Film: Inner Reflections on A Separation 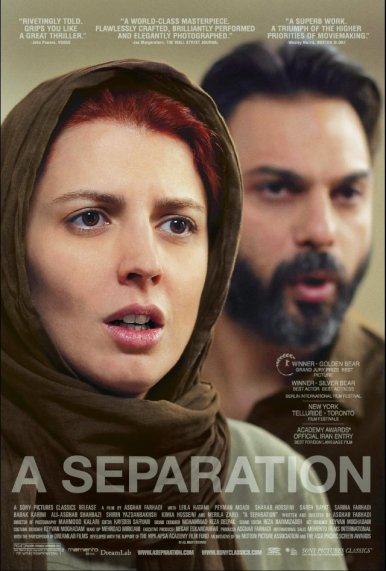 I thought I had gone crazy the first time I saw an advertisement for A Separation  at my gym late last year.   Either I had been spinning for way too long or there was a picture of Leila Hatami on the television screen in front of me. Apparently, I hadn’t been spinning long enough to lose my mind. In fact, Asghar Farhadi’s film, a drama that surrounds a couple (Nader and Simin) in love whose marriage falls apart after a series of events, was playing in select theaters.  It was not too long after that the film was awarded a Golden Globe.

As an Iranian-American, I was ecstatic that the film had won a Golden Globe for best foreign picture. The first thing I made sure to do was inform the whole world (or in my case, my 500 Facebook friends) that an Iranian film had won such a prestigious award. It wasn’t too long after the excitement had settled that the questions started flooding my mind, a brainstorm of sorts.  What were the implications of this award? Why had Sony Picture Classics even decided to purchase the rights to this film? Why had the Golden Globe committee decide to choose a film from an infamous, so-called “Axis of Evil” country?

There are no straightforward answers to the questions I have, only speculations. I can’t help but to wonder why the Motion Picture Association (in collaboration with the Asia Pacific Screen Awards) would fund this film.   Why would Sony Pictures Classics purchase the rights to show an Iranian filmin North America in the midst of the deteriorating relationship between the United States and Iran?  It all seems so ironic. On one hand, you have Hollywood and the American public raving about this “beautifully photographed, superbly acted” film while the American government pushes for stricter international sanctions on the very country where this film was produced. We’re asking the rest of the world to discontinue the diminutive business (obviously oil related business) with Iran while we support filmmaking in a country we so adamantly oppose. It all seems nonsensical.

As I mentioned before, these are mere speculations. Another thought that may explain the popularity of A Separation in the U.S. is that its themes – truth vs. deceit, love vs. love lost, accuser vs. accused – are universal themes that don’t need subtitles to be understood.  While the tribulations that Nader, the film’s protagonist, face may be specific to life in Iran, losing a loved one or dealing with divorce is not pertinent to just Iranians. Or is it that the international community, along with Americans, is realizing that if we peel back the labels we’ve placed on Iranians (“Extremists” and “Members of the Axis of Evil”), we find a series of young, talented artist? I’d like to believe so.

While A Separation has won a series of international awards, the spotlight is still shining on this Iranian feature. The film has been nominated for an Academy Award for best foreign film.

(The film poster from Sony Pictures Classics is used here under fair comment and fair use guidelines and for promotional purposes.  To see a trailer for the film, please check below.)

2 Responses to Film: Inner Reflections on A Separation