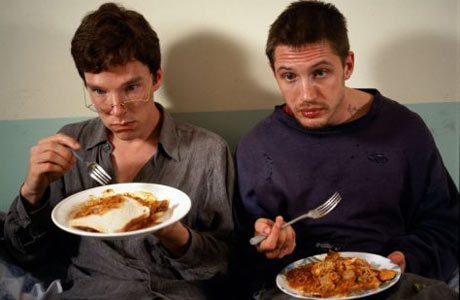 Stuart: A Life Backwards, a made-for-television film co-produced by the BBC and HBO from 2007, tells the true story of Alexander Masters, a volunteer at a homeless shelter, his friendship with Stuart Shorter, a homeless man who has been in and out of prison, and how the two of them became friends as well as how Alexander comes to write the biography of Stuart’s life.

The story begins with Alexander working for a homeless shelter, when one day two of the supervisors are arrested because some of the homeless people at the shelter had been dealing drugs and the supervisors are being held accountable. Alexander then begins a campaign to free the supervisors, known as the Cambridge Two, and in the process he ends up becoming friends with Stuart, who contributes quite a few ideas to the campaign. The story then follows the progression of their friendship as Alexander meets Stuart’s family, brings Stuart to spend time with his friends and even accompanies him to court for his latest trial.

While the story seems simple, it is told in an interesting manner. The audience is treated to:  moments of panic in Alexander’s head, which are illustrated by amusing cartoons, when he tries to visualize what exactly is going on without quite understanding everything; flashbacks to Stuart’s past; and interviews with the people who know Stuart. While the story doesn’t work in a perfect chronological order as the audience watches events and uncovers information almost entirely in step with Alexander, by the end of the film the story is in fact quite clear.

The acting in this film, however, is by no means simple. Benedict Cumberbatch plays Alexander as a character to which everyone can relate. He is stand-offish towards the homeless at first as he is only there for a volunteer job. As he warms up to Stuart, a whole new level of personality is revealed and the audience connects again. Meanwhile, Tom Hardy plays Stuart, a character who is so complex and full of emotions that without the help of Alexander as an aide for the audience he wouldn’t be fully understood.

Honestly, had I not known the actors in this film, I’m not entirely sure that I would have picked it up as it’s not something that immediately strikes my interest. But, after watching it, I quite enjoyed it, and recommend it, if only for the acting and the amusing animation.

(The photo is from the film via the BBC and is used here for promotional purposes following fair use and fair comment guidelines.  To see a trailer for the film please check below.)

About Directed By Bex

Becky Blizard (or Becky Mezz as she is often called) cannot be defined in any sort of neatly packaged way. Becky is a beauty pageant contestant turned ballerina turned musician turned actor turned filmmaker/photographer turned adult figure skater and hockey player. A Baltimore native, she has lived in Prague, the Czech Republic, Cairo, Egypt and Washington, DC. In her free time, Becky can be found obsessing over Korean and British TV shows, learning new jumps on the ice, or yelling at a hockey game like a disappointed mother. Follow her on Instagram (@asdirectedbybecky) or Twitter (@DirectedByBecky).
View all posts by Directed By Bex →
This entry was posted in BBC, Films, Television and tagged "Stuart: A Life Backwards", BBC, Benedict Cumberbatch, films, HBO, television, Tom Hardy. Bookmark the permalink.