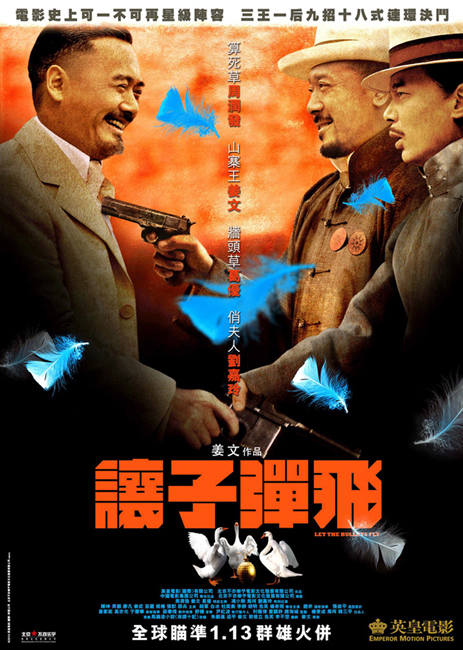 When Filmfest DC (the annual International Film Festival in Washington, D.C., this year from April 11 until April 22) released its playlist for its 26th year, I was thrilled to see Let the Bullets Fly in their featured films. To me, it was THE (not one of the) best Chinese film released in 2010. I’ve watched it four times since it came out: twice in the theater, twice on DVD, and every time I was able to find something more in it.

Directed by actor Jiang Wen a Beijing native filmmaker (known for In the Heat of the Sun, Devils on the Doorstep, and The Sun Also Rises)  Let the Bullets Fly is set in 1920s’ warlord China. In some remote suburb, the notorious bandit “Pocky” Zhang (played by Jiang Wen) and his gang attack a train that happens to have the newly appointed governor of Goose Town on board. The gang then realize there is nothing valuable on the train, and the only two people who survived the train crash are the governor’s wife and the governor’s advisor “Tang” (Ge You). Hoping to make some money out of the position, Zhang decides to take the dead governor’s place and heads to Goose Town. But their journey is far more complicated and dangerous than they expected. Despite of the fact that Zhang is already the number one wanted criminal in that area, the town is under the control of Master Huang (Chow Yun Fat), a rich and ruthless man.  After Zhang and his gang arrives, one thing leads to another, their adventure takes an unexpected turn and eventually to a battle against Huang.

The movie was a great hit in China. It banked $104 million at the box office there (compared to Avatar’s Chinese box office take of $204 million), and the film received almost all positive reviews from both audiences and critics. Because the story can be so complex and open, discussions around it continues to this day.

Jiang is a big fan of mob films. I read in an interview somewhere that before he began to adapt the story (the movie Let the Bullets Fly is based on a chapter from the novel Ten Stories of the Night by Chinese writer Ma Shitu), Jiang gathered his team in a retreat center and let them watch The Godfather over and over again for weeks until one day he said to group, “after this, you can’t possibly let me down.”

So the result is this dark comedy with a taste of Quentin Tarantino’s violence and humor, a splash of Francis Ford Coppola’s masculinity and toughness, and a hint of American classic western movies. But at its core, it still has the characteristic of a Chinese production, sparkling with witty slang and Chinese humor. Most of all, the story it tells is particularly relevant to today’s China: a heroic figure who is both intelligent and brave breaks into a corrupt town and attempts to overthrow a power so rotten but yet so strong.

Let the Bullets Fly has the boldness and bluntness that are seldom seen in other Chinese movies.

The amazing thing about this movie is it works like a mirror. It reflects the world in one’s heart and shows a different face to different people. In the end, everyone is able to enjoy the movie, even though their takeaways may vary greatly. Some may see it as a political parody and dig into the scattered hints and metaphors (I’m not going into all the theories to influence your judgement but they’re out there on the internet if you’re interested); while others may just take it as a comedy or action movie for them to sit back, eat popcorn and laugh out loud.

I’m guessing that’s how this movie got pass SARFT’s (the Chinese State Administration of Radio, Film and Television) strict inspection and screened across the country almost uncut. SARFT clearly didn’t see what some of us were so astonished to see in Chinese cinemas. Of all the political metaphors we found in the movie, this is definitely the most ironic one.

Oh but there’s no need to rush to see it.  Just Let the Bullets Fly.

(Postscript: The movie Let the Bullets Fly gets a 84% freshness rating from Rotten Tomatoes film review website and a score of 7.1 from the Internet Movie Database (IMDb).)

(Editor’s Note: Thanks to Filmfest DC there will be two showings of the film in Washington, D.C. in the next week:  Friday, April 13 at 6:30 p.m. at the Regal Cinemas at Gallery Place; and Saturday, April 14 at 9:15 p.m. at Landmark’s E Street Cinema.)

(The film poster is from distributor Emperor Motion Pictures and is used here under fair use and fair comment guidelines.  To see a subtitled trailer for the film, please check below.)