Peng Liyuan, 54, known as “Mama Peng” by many Chinese children, is a successful singer and performing artist. Her songs, including Zhumulangma, People from Our Village and In the Field of Hope, are so popular that many foreigners know how to sing them. Liyuan earned a master’s degree in traditional ethnic music in China, and she is also the president of the People’s Liberation Army Academy of Art. But most importantly, she is the wife of the current Chinese leader Xi Jinping.

When President Xi joined the standing committee of the Politburo in 2007, Peng was more famous than he was. According to The Economist, the U.S. media used a humorous way to introduce him, saying, “Who is Xi Jinping? He’s Peng Liyuan’s husband.”

Peng has gradually become a significant symbol of China. Since 2013, as the first lady, Peng has joined President Xi Jinping’s on his visit to Russia and other countries. These visits not only resulted in great acclaim in China, even the foreign media find that they want to report on her as an expression of her popularity.

“In her role as first lady on the itinerary in Moscow, Peng Liyuan is exhibiting China’s soft power,” said Wang Fan, head of the Institute of International Relations at China Foreign Affairs University, told The Telegraph. “As a singer and artist and a long-term advocate for poverty relief and other causes, Peng has an excellent public image.” 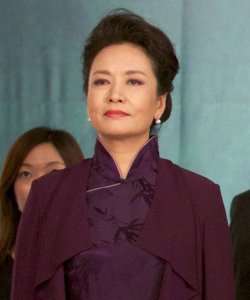 How does Peng shape her image through the media? To what extent does this image, as soft power, help China to show itself more confidently in front of the whole world? Unlike China’s former first ladies who rarely appeared in public, Peng’s popularity has boosted China’s soft power, said the state-run Global Times, “Peng’s graceful performance and inspiring speeches delivered abroad could send the message out soundly and profoundly that the representative of Chinese mothers cares for orphans in Russia and elsewhere, and that China is committed to working with others for world peace and development.”

According to The Telegraph, Shen Dingli, a professor of International Relations at Shanghai’s Fudan University, said the first lady, who has also been compared to American First Ladies Jackie Kennedy and Michelle Obama and Britain’s Princess Kate Middleton, could be instrumental in showing the world China’s attractiveness.

“She is talented. She is presentable. She shows respect to others and expresses the desire to work harmoniously together,” he said in the Telegraph story. “The first lady has a graceful way of presenting the ways in which China is attractive.”

Many people comment on Peng’s facial expressions, behaviors, and speech. Even her traditional dressing style is discussed widely, which to some extent also promotes Chinese designs and cultural image abroad. The Telegraph called her “a master in the art of diplomatic dressing,” describing the blue silk coat-dress she wore in Buckingham Palace as “the height of restrained elegance.”

For the diplomatic performance of China’s first lady, some media sites have said she is both elegant and glamorous. CNBC reported that according to research by Renmin University of China, Peng’s “elegant manners” and participation in various charitable events could enhance China’s soft power and temper fears stemming from its economic ascent.

Peng is also involved in public welfare issues. She is the “goodwill ambassador” of the World Health Organization, raising awareness of tuberculosis and HIV/AIDS prevention. Peng has been concerned about AIDS orphans for almost a decade, according to Sina, In early 2006, Peng accepted the invitation of the Ministry of Health to become a volunteer to help prevent AIDS. Since then, she has been helping the AIDS orphans. “In recent years, helping them become the focus of my life,” said Peng Liyuan.

According to CNBC, Zhou Jiali, a researcher from China Foreign Affairs University, said that most foreign media now see Peng Liyuan as a positive factor raising China’s image. Transformed from the queen of singers to China’s first lady, her image, of being elegant and confident, has successfully created her distinctive “Chinese style of positive energy.”